Spotting a bald eagle in the parking lot of the ferry dock sure seemed like a good omen for the owl banding adventure.  And it was; that bald eagle was just the beginning.

Last weekend, our field instructor interns, along with a few permanent staff, had the amazing opportunity to help band owls and song birds on Kelleys Island.

Traveling to the island by ferry was an enjoyable experience in itself; the weather was gorgeous; chilly with the perfect amount of sunshine.  Upon arrival, everyone checked in to the historic Inn at Kelleys Island.  The proprietors were very gracious and welcoming in allowing everyone to stay in their charming bed and breakfast.  In addition to their hospitality, they also shared their knowledge of the island’s unique geology.

After settling in, everyone met up with The Cleveland Museum of Natural History’s naturalists, Judy Semroc and Larry Rosche, for an in depth look at the island’s geology and biology.  Those two never cease to amaze us with their vast knowledge of the natural world.  Time was spent exploring the iconic glacial grooves, finding brachiopod, trilobite, and crinoid fossils near a quarry, and exploring some remarkable trees.  Judy and Larry also stressed the value of the rare alvar ecosystem found on the island.  This limestone and dolomite based environment contains minimal amounts of soil and therefore supports a myriad of rare grasses, lichens, and mosses.  Only a few of these alvar habitats remain in the world.  To top off this exploration time, a merlin bird was spotted flying overhead.  Having just had raptors visit the EEC, it was awesome to see this member of the falcon genus flying in the wild. 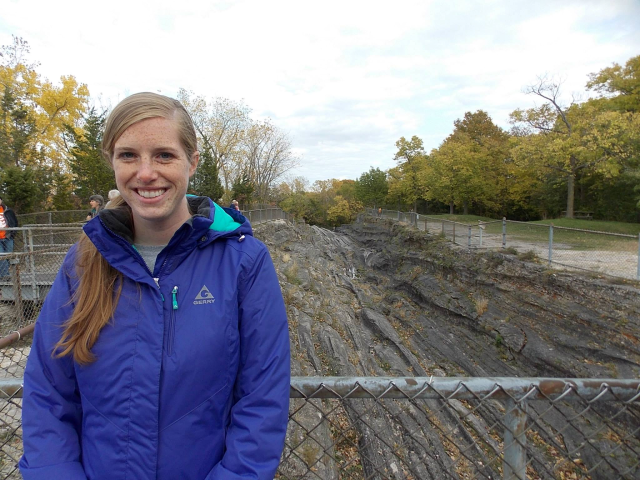 Carrie and the glacial grooves. Photo by Susan Fritsch

That evening, the gang reconvened at the Scheele Preserve for owl banding.  Tom Bartlett, a retired high school science teacher, who is now a research associate of ornithology at the Natural History Museum, led everyone through the process.  Tom has been banding birds for 42 years and took to banding owls 11 years ago.  Having banded close to 65,000 birds in his lifetime, Tom’s contributions have been an integral part of migration and population dynamic research.  Both the Natural History Museum and USGS support the work Tom is conducting on Kelleys Island.

With truly spectacular stars overhead and the Milky Way in view, Tom took groups out to the mist nets to collect the captured birds.  This night, succeeding several nights of unsuccessful capture, set the group with low expectations.  As the recorded sounds of Screech Owls played from the research camp, several owls swooped into the surrounding trees.  While it was amazing to see the silent, winged birds, the Screech Owls proved to outsmart the researchers by avoiding the mist nets.

But, then, as a team went to check the nets in a different section, there, in the net, was a Saw-whet Owl!  These small, five to six inch, birds weigh around three ounces, and in our opinion, are absolutely adorable.  By checking the bird’s fat beneath the feathers, Tom inferred that this bird was captured in mid-migration from Canada to southern Ohio or northern Kentucky.  The bird was brought back to the research site, measured, weighed, and banded.  Excitement spread through the group as this was the first owl catch of the season.  Seeing a Saw-whet was a first for many of the interns and it was the highlight of the weekend for most.  Though we credit Tom for his expert skills in the capture, we like to think our interns brought the good luck. 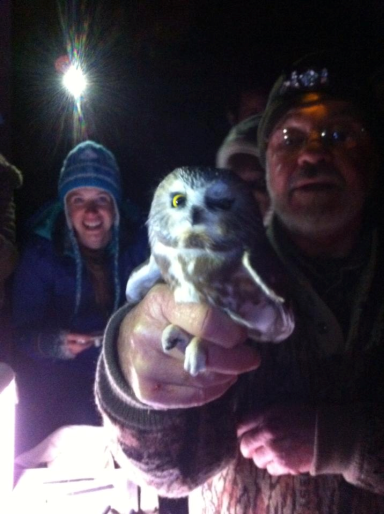 Before the ferry left the next morning, everyone gathered for a final project; banding songbirds.  Tom met the group at the Jones Preserve on Long Point; a beautiful area with views of Canada across the water.  Prior to arrival, Tom had set up 11 different mist nets; this great amount of nets yielded great success.  By the end of the morning the group caught, banded, and released two Yellow-rumped Warblers, two Ruby-throated Warblers, two Hermit Thrushes, two Ruby-crowned Kinglets, three Chickadees, and two Golden-crowned Kinglets.  Each intern got to hold and release one of the birds.  It was a pretty spectacular experience.

Kyle with a Hermit Thrush. Photo by Stacey Heffernan 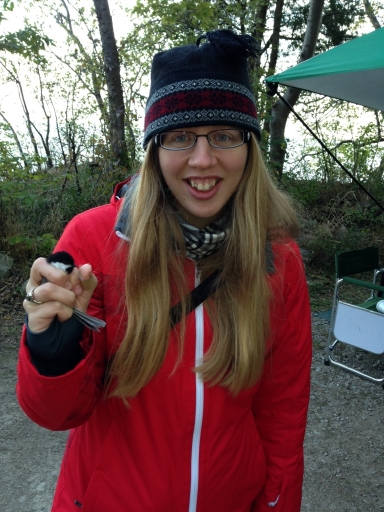 All in all, it was fabulous and educational trip for all involved.  Awesome sunsets, rare ecosystems, unique geology, owl interactions, songbird capture, and solidifying friendships all happened within a weekend.  When asked what the highlight was, one intern expressed, “Everything was truly amazing, and I absolutely must go back.”